Lisbon has some of the best-value places to eat in of any Western European city, huge portions of quality Portuguese food at sensible prices. Lunchtimes are traditionally Lisboetas main meal and it's when you're likely to find the best deals and daily specials. Prix fixe (ementa turística) meal will give you a satisfying three-course meal for under €15. As a coastal city and capital to a seafaring nation, fish and seafood feature heavily on restaurant menus. Flavours of Portuguese food has in the past and continues to be influenced by its colonies: Brazil, Mozambique, Angola, Cape Verde, Macão and Goa. Lisbon’s cafés are atmospheric and a pleasure to spend some time. There's a number of Art Nouveau and Art Deco establishments jampacked with sweet pastries and quality strong coffee.

You would expect from a country where so much of its landmass is coastal, with a heritage of seafaring, their food obsession would be about fish. In Portugal's case, you would be right. Atlantic currents bring an abundance of white fish to Portugal's shores, such as bass and bream. Other seafood and shellfish happily shelter in the vast number of coves, lagoons and inlets. One delicacy prized all along the western Iberian coast is the Goose Barnacle, known as Percebes in Portuguese. They're found growing on the rocks contently being battered by the Atlantic waves. Collectors or "percebeiros" have to risk their lives on slippery steep cliffs braving the hefty currents and swell. The coastline around the capital is a perfect habitat for Goose Barnacles.

However, if these odd-looking creatures aren't your thing, then there's plenty of alternatives found in a great number of fish restaurants found in the area. There's nothing better in my mind to enjoy the catch of the day simply chargrilled, with a squeeze of lemon and a pinch of sea salt, helped down by a chilled Setúbal white wine. Portuguese also enjoy fish stews, most notably the Cataplana. Named after the clam-shaped pan it's cooked in. The Cataplana originates from the Algarve, possibly from Moorish origins. Cataplana is now found all over Portugal with regional variations. Most often, it's a dish shared by two people.

Sardinhas Assadas (grilled Sardines) are a staple in restaurants all over Portugal, yet best eaten during the Santo António festivities in June when they're in season. In Cascais, they claim to serve the best sardines in Portugal. Another popular dish found everywhere is Amêijoas à Bulhão Pato, clams in a garlic-coriander-wine sauce, ideal for dipping crusty bread into on a balmy afternoon. Not all the fish found on Sintra's menus are locally caught, however, Salmon and Bacalhau are most likely sourced from Scandinavia or the North Atlantic. Bacalhau (dried salted cod) is Portugal's national dish. Their obsession with it is reflected by the vast array of recipes on offer. It's said there are 365 different ways to cook bacalhau, one for each day of the year. In Lisbon, you're likely to come across Bacalhau com Natas, Bacalhau à Brás and various other house styles.

One suggestion if you wish to experience great fish in Lisbon is to take the ferry from Cais do Sodre to Calcilhas and visit one of the best fish and seafood restaurants in the region. These restaurants have a huge array of dishes on offer, which will go well with a refreshing pint any time of the day. The cafés and restaurants are located alongside the promenade where there are amazing views over the river to Lisbon. The variety of dishes available here is extraordinary. Come in time for sunset for an increased magical experience. The Rua das Portas de Santo Antão, close to the Praça dos Restauradores, in downtown Lisbon, is a lively pedestrianised street known for its seafood restaurants.

One of Lisbon's fishy delights are tinned fish, most commonly sardines. They're sold in attractively designed packaging. Prices vary greatly but be wary of the inflated prices found in tourist traps. Best places to find tinned fish is in one of Lisbon's many delicatessens. For an alternative lunch head for Sol e Pesca in Pink Street (Rua Nova do Carvalho) close to the Cais do Sodre translation where all dishes are made from a wide selection of tinned fish. 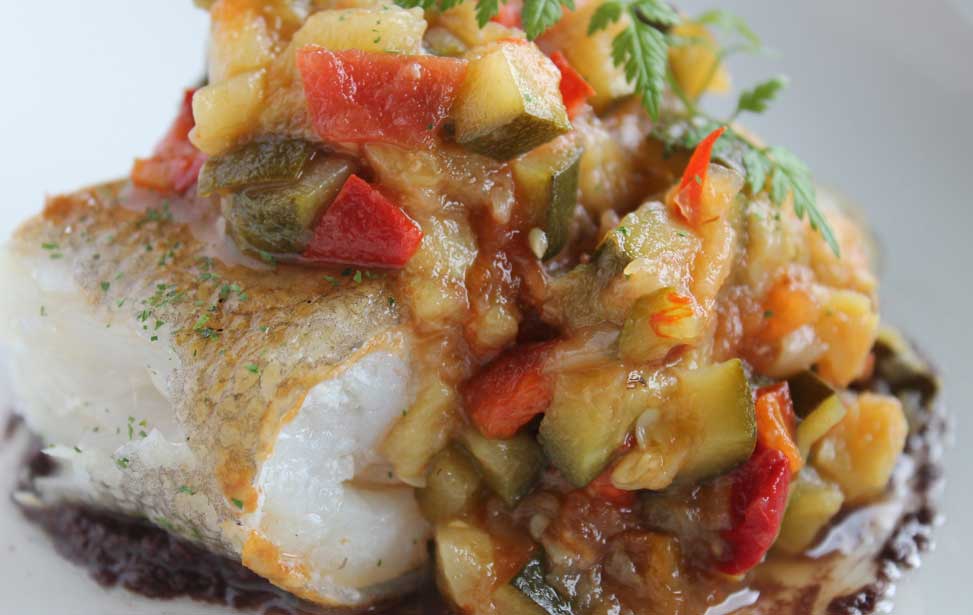 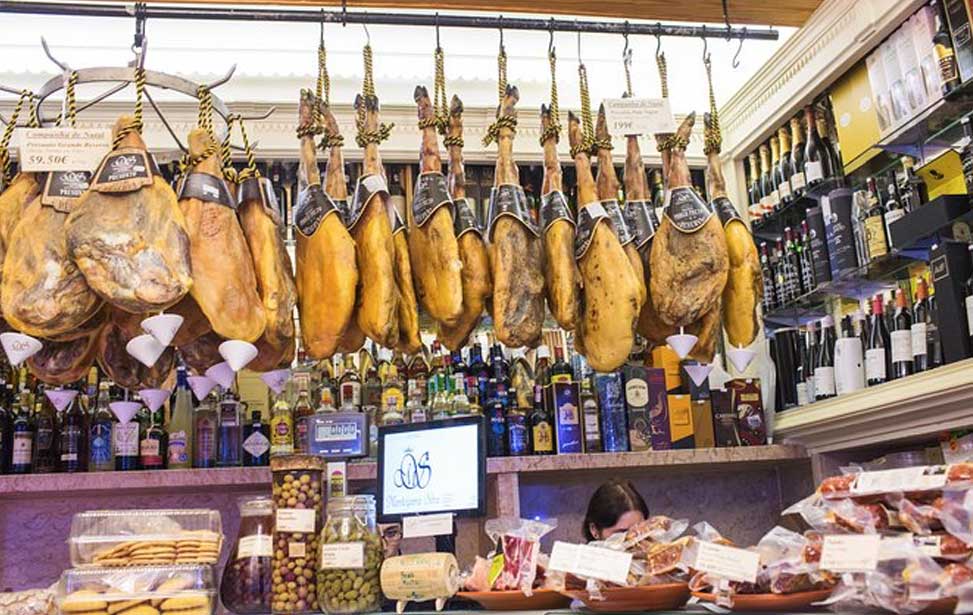 Savour gourmet foods from Portugal during this small-group guided food and wine tour of Lisbon. Taste cheese, pastries, and Port; enjoy a Lisbon wine tasting from the Alentejo and learn why this region produces some of the world’s best wine. Plus, your guide provides you with tips on the city’s best food. This tour is limited to 15 people to ensure a personalised experience. Food tour suitable for vegetarians, please note any special requirements at the time of booking.

• Taste Portuguese pastries, cheese, Port, and cherry brandy
• Visit some of the best food purveyors and restaurants
• Learn about Portugal's food and wine traditions from your local guide.

Discover the rich tapestry that is Portuguese cuisine during this food tour of Lisbon’s most historic neighbourhoods. Visit Alfama, Baixa, and Mouraria for several tastings during the course of a few hours and learn about the history of each dish from your guide. Sample everything from pastries to meat and seafood to local liqueurs and try to find your favourite Portuguese dish. 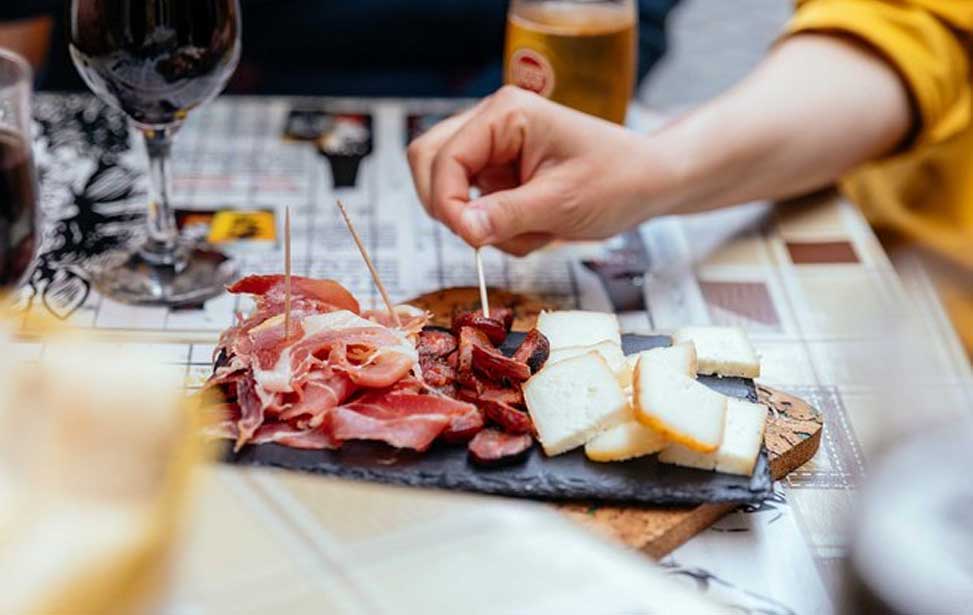 This private half-day food tour of Lisbon ensures you feast on the best food that Portugal’s capital has to offer. Your gastronome guide handpicks eateries in which to sample Portuguese specialities and traditional drinks: delight your palate with delicacies such as grilled sardines, locally made cheese, Alheira sausage, and ‘pastel de nata’ (custard tart). During the journey between eateries, enjoy panoramic city vistas and explore the Alfama, Lisbon’s oldest neighbourhood. Your private tour can be tailored to suit dietary requirements and preferences. 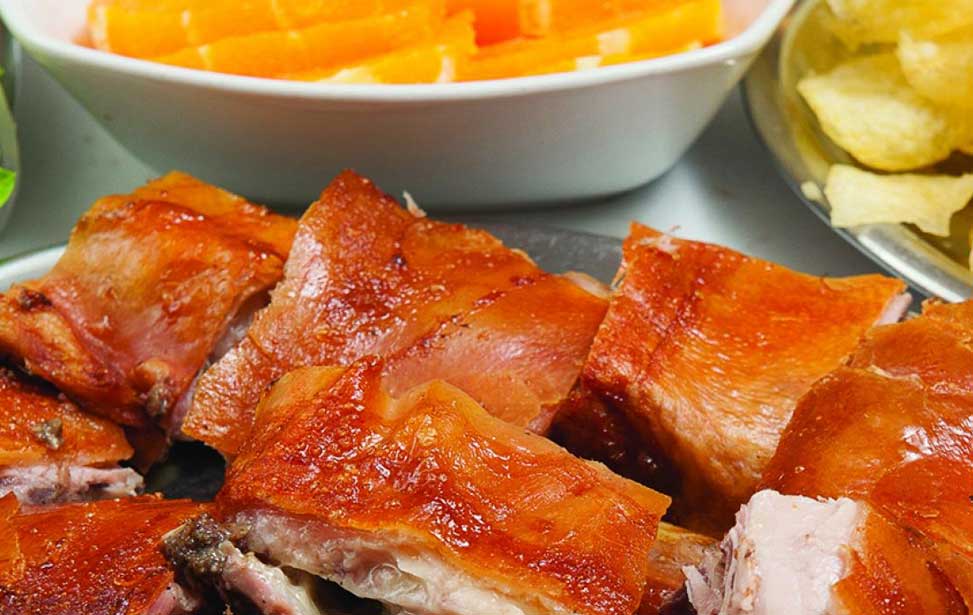 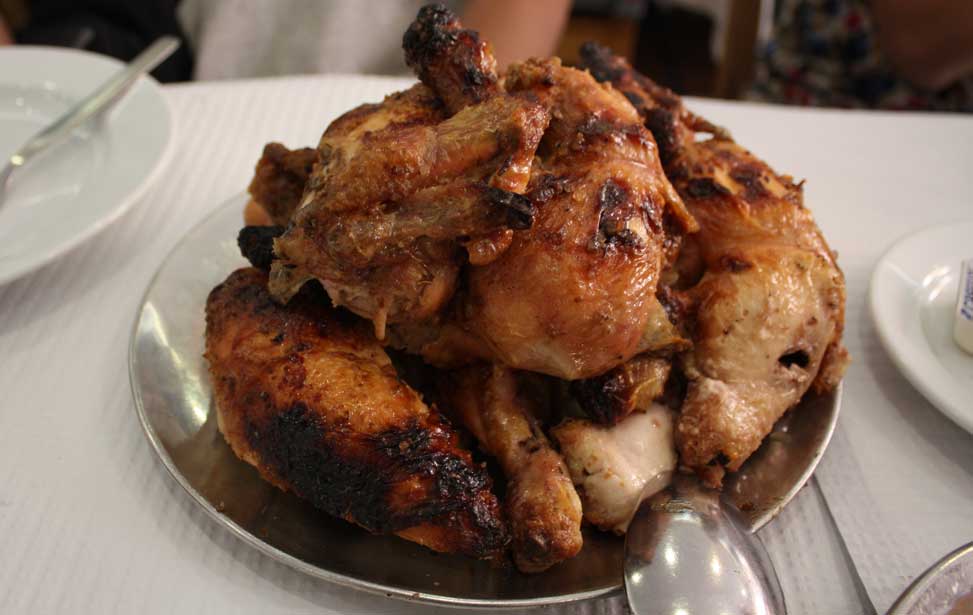 You can find most types of meat and poultry on a Portuguese menu. There's usually two or three types of steak on offer, beef or veal. Pork makes an appearance very often. Look out for Porco Preto, a breed of black pig originating from the Alentejo.

Meat sandwiches are popular in Portugal, they're always very tasty, great value for money and ideal for a quick lunch when on the move. The Bifana is a pork loin steak slowly cooked in white wine, garlic, and spices. served in a crusty bread roll.

A garlicky steak sandwich known as a Prego is often served in a Bolo do Caco, Madeiran bread, made from flour and sweet potato. A personal favourite is the Sandes de Leitão, moist and tender pieces of roasted suckling piglet with a pepper-and-salt sauce made from the roasting juices of the meat in a crusty roll.

Meat finds its way into stews too, the Cozido is a hearty one-pot dish of various meats, sausages and vegetables. A Feijoada, similar to cassoulet, is a belly-busting smoky pork and bean stew, which uses various cured sausages to give it flavour and off-cuts of pork. Another tasty one-pot is Arroz de Pato, which is essentially a risotto made from duck, chouriço and rice, finished off in the oven ten minutes before serving.

Portugal has a rich tradition of making fine chouriço type sausages and hams, many with DOP status, including some great blood sausages. The Alheira is a smoked chicken sausage created by jews during the Inquisition to fake pork consumption. It is traditionally made from chicken or game mixed with bread and fat.

Chicken is a popular dish often grilled with Piri-Piri in specialised restaurants. For a great grilled chicken, with or without piri-piri head for the Bonjardin restaurant located in a street just off the Praça dos Restauranadores. This unassuming looking establishment is reputed by Lisboetas to made the best – who are we to argue? Turkey is a popular choice also, mainly served in steak form. 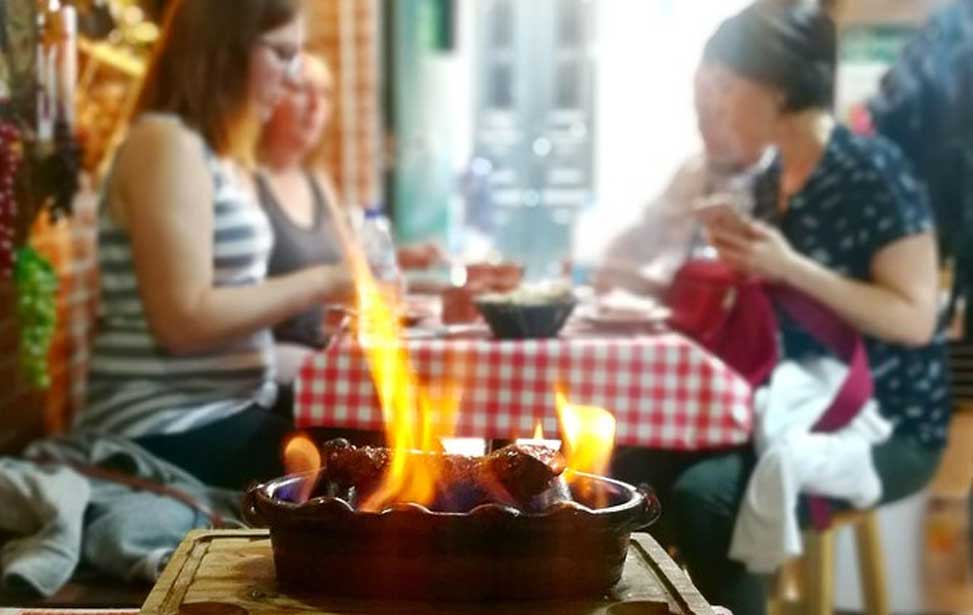 In support of traditional family-run restaurants in the Alfama enjoy homemade culinary delights in the capable hand's dedicated foodie guides. Explore Lisbon off the beaten paths and enjoy 18 food tastings in authentic places. Sample wines, cheeses, charcuterie, typical pastries and many other gastronomic delights. Lose the modern world within the labyrinth of winding alleys, full of hidden treasures. Let yourself be transported by the soft light of Alfama and stroll through aromas and flavours that entice all your senses. The tour is plastic-free and restricted to twelve people for a personal experience.

Lovers of fine wine and good food will be delighted by this private food tour of Lisbon. Experience distinctive bars, handpicked by your gastronome guide, and sample wine and Portuguese delicacy in each. Gain local insight as you visit a mix of hip bars and local taverns suffused by Fado music, and pleasure your palate with grilled sardines, ‘Ginjinha’ (sour cherry liqueur), and fava beans. This private tour can be customised according to your dietary requirements and preferences. 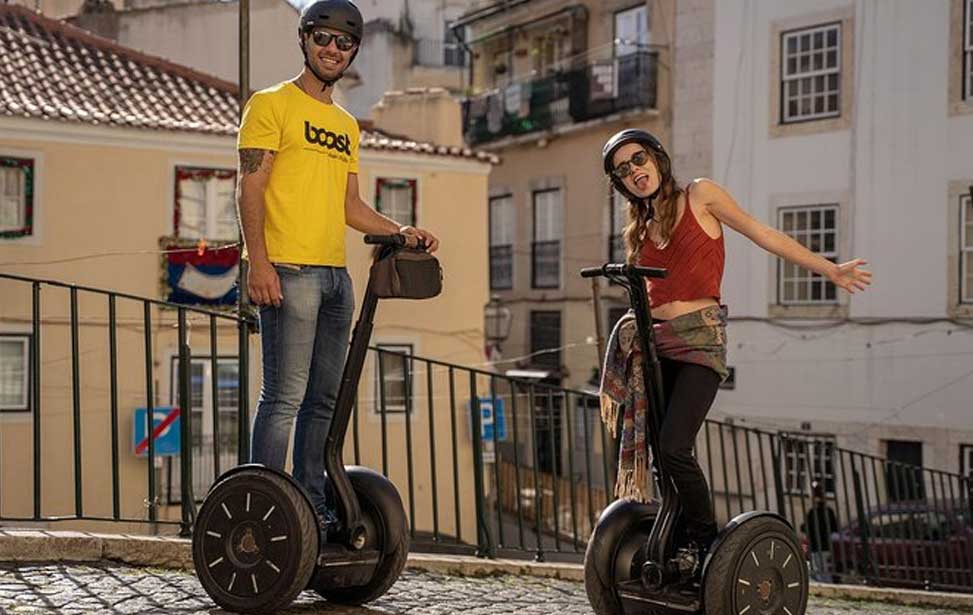 Foodie Tour of Alfama and Old Town Lisbon on a Segway

Embark on a thrilling Segway tour of Lisbon’s main points of interest with delicious Portuguese food. With the assistance of your local guide, glide through Lisbon’s scenic streets as you take in sights such as the iconic Sé de Lisboa Cathedral, the St Anthony of Padua Church in the charming Alfama neighbourhood and the medieval Castelo de São Jorge. This tour goes beyond just sightseeing, as you’ll have the opportunity to taste authentic cuisine like Portuguese pastries and ice cream, and visit shops run by locals. This is a small-group tour limited to eight people to ensure an intimate experience. Suitable for all levels – no experience necessary!

Portuguese has a sweet tooth and each town in the country seems to have its own dessert. Visiting a Pastelaria is a must in Lisbon to sample something heavenly. Most famous in Lisbon is Pastel de Nata which originates from Belém. It dates back to the 1800s when monasteries made them as a way to use egg yolks, the whites were used for producing ink and paints in the bible making process. The home of this custard tart is the Pastéis de Belém café next to the Jerónimos monestry. That said you can buy Pasteis de Nata all over Lisbon, many bakeries will have their own individual take on this classic pastry.

Other common cakes you must try are; Bolo de Arroz, a rice-flour muffin, Bola de Belim, doughnut pastry with sweet custard, Chocolate Salami, a concoction of broken biscuit and chocolate, and Queijada, small cheesecake tarts. These come in many regional variations, all as sweet as the next. If you're in Sintra try a Travesseiro de Sinta, a pillow of pastry stuffed with egg and almond cream. 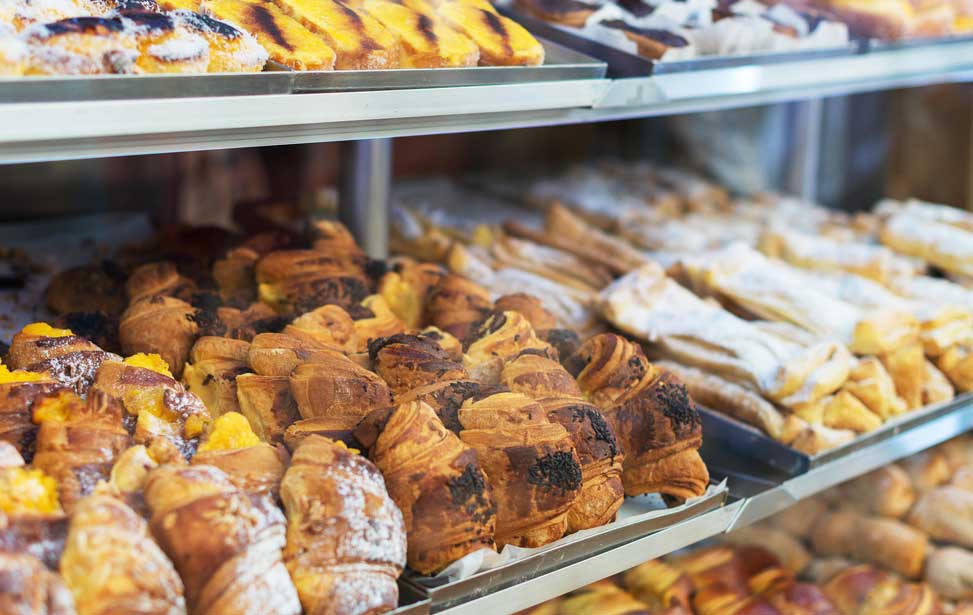